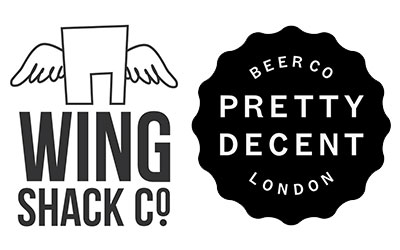 Cans of Wing Shack Co Lager and Cluck Bait Pale Ale will be available to buy from November in all Wing Shack restaurants, on Deliveroo and their website shop.

Both beers will also be on draft at the soon-to-open Brixton and Bromley restaurants – the latter being Wing Shack’s biggest site yet.

And you can drink with a conscience, as for each beer sold a donation will be made to Only A Pavement Away.

Ex-offender Joshua is an advisor for Only A Pavement Away, mentoring young people and helping them turn their life around, just like he did when he built up the Wing Shack chicken empire.

Wing Shack will donate 10p from every beer sale to Only A Pavement Away. Pretty Decent Beer Co promise to do the same via the Work For Good platform, meaning 20p from each beer sale will go to charity.

Joshua is excited about the beer collaboration for many reasons. He said: “I grew up in Newham, so having the opportunity to work with another independent business from the area is really exciting.

“I’ve always wanted to create a beer (or two) for the Wing Shack brand, and being able to link this with Pretty Decent Beer Company Co’s charity ethos and my advisory role for Only A Pavement Away makes this collaboration even better.

“Wing Shack fans can now enjoy our beers while supporting independent businesses, and knowing that a donation is being made to a cause that helps others.”

Wing Shack Co’s signature beer is zesty, crisp and fresh, and the perfect complement to our chicken wings. It truly is fuel for wings. Hot and spicy or sweet and sticky? Either way, this beer will wash down perfectly with any wing flavour combination.

The Wing Shack Co team worked with Pretty Decent Beer Company Co’s Head Brewer Chris Pollard to craft this exclusive pale ale. Made with Mosaic and Simcoe hops, it has a tropical and hazy taste and is a sessional pale ale designed to seriously bait our wings.

Both beers will also be available on draft as well as cans in the new south London restaurants in Brixton and Bromley when they open in late November.