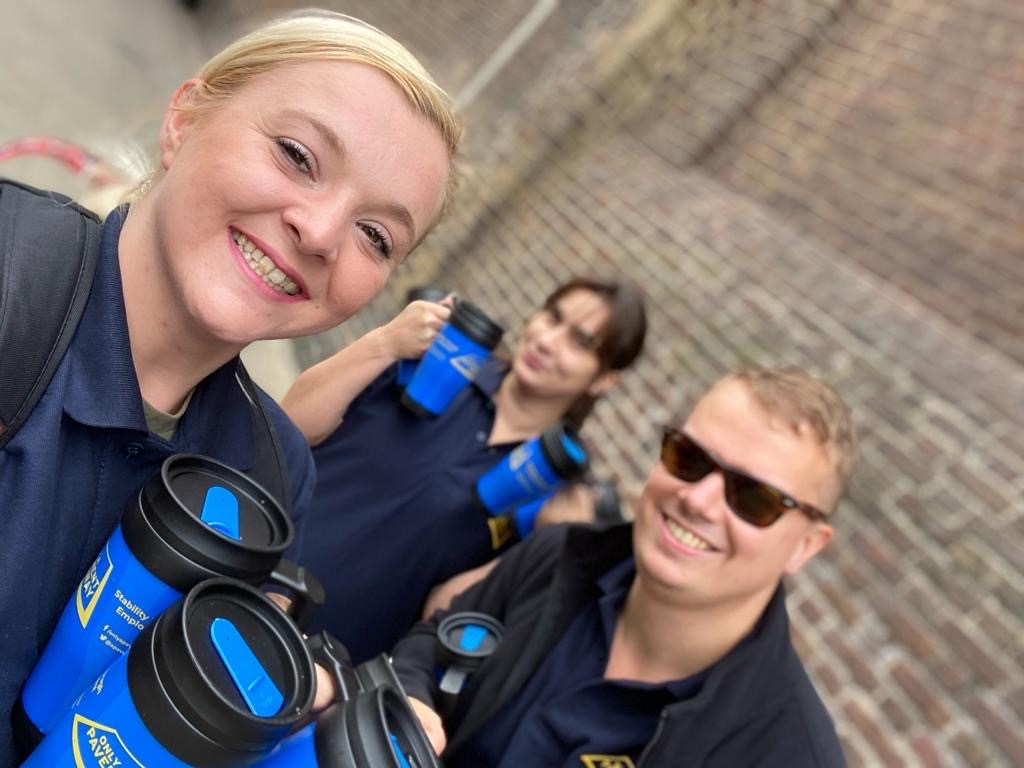 Following the success of the inaugural Fill a Flask campaign in 2019, 92 Only A Pavement Away volunteers in London and Brighton donated their time last week to fill and distribute 1,700 thermal flasks of cold water to homeless individuals who may lack access to hydration during the summer months.

Featuring the Only A Pavement Away logo and contact information, it is hoped the branded thermal flasks will raise awareness of the charity and its services to vulnerable individuals in need across both cities, whilst also helping to keep them hydrated throughout the year.

With a number of organisations including Greene King, The Ivy Collection, Craft Union Pub Company, Thomas Franks Ltd, The Strand Palace Hotel, The Athenaeum Hotel, Caterer.com, KAM Media and Bums on Seats all pledging their support, the £7,000 running costs of the Fill a Flask 2020 campaign were met through sponsorship and donations from Greene King, Thomas Franks Ltd and a very generous donation from an anonymous donor.

Fill a Flask 2020 was also made possible thanks to backing from leading London restaurant group QOOT, responsible for operating brands such as The Lebanese Bakery, and by CHLOE., who not only raised crucial funds but also provided volunteers and water filling stations at several of their sites in London. The restaurant group and latest employer to enter in partnership with Only A Pavement Away will continue to work with the charity for the foreseeable future in both a fundraising and advisory role, specifically assisting with the charity’s new Candidate Profile Page (CPP) which now holds the details of 50 candidates looking to gain employment within the hospitality industry. Both campaign days were also facilitated by Craft Union Pub Company and The Ivy Collection who supplied a significant number of volunteers with Craft Union Pub Company also providing half of the total filling stations over the course of the campaign.

Greg Mangham, Founder of Only A Pavement Away, said: “After we received such an amazing level of support during last year’s Fill a Flask campaign, we didn’t think it would be possible to top our end result. But once again we have been blown away by the enthusiasm and generosity of the hospitality industry and we are thrilled that we were able to distribute almost 50% more flasks this time around. As we look ahead to the rest of the year, we are busy finalising plans for our upcoming Winter Warmth campaign in November which will see volunteers hand out warm clothing, sleeping bags and toiletries to homeless individuals across numerous cities in the UK. Our plan is to ensure that both initiatives become firm annual fixtures in the charity calendar and we hope that many businesses and individuals will continue to lend us their support!”

Scott Turner, Vice President of Operations at QOOT, said: “We’re delighted to have partnered with Only A Pavement Away and are looking forward to working closely with Greg and his team in the coming months as both an Employer Partner and regular fundraiser to help homeless individuals and vulnerable groups get back on their feet and re-enter the world of work. It was a privilege to provide water filling stations at 4 of our sites across the city during the Fill a Flask event in London and we are extremely grateful to the QOOT employees who volunteered their time to support such an important cause and help those living on the streets keep hydrated during the warm summer months.”

Rebecca Johnson, Sales and Marketing Manager at Craft Union Pub Company, said: “From enlisting our operators and Pub Hub Support team members as volunteers to converting some of our pubs into filling stations, taking part in Fill A Flask 2020 was such a fantastic experience for all of us at Craft Union and it was a pleasure to assist Greg with so many of the logistics ahead of the campaign this year. We have enjoyed a longstanding relationship with Only A Pavement Away for some time now and were delighted to raise over £1,000 for the charity in the last few months through our Over The Rainbow Challenge. Looking ahead, we’re excited to see what the future has in store and we hope to continue to support Greg in whatever way we can!”

Janene Pretorius, Director of People for The Ivy Collection, said: “We were thrilled to be able to volunteer last week in support of the Fill A Flask campaign. Only A Pavement Away carries out such important work to support those experiencing homelessness and offering them a fresh start through jobs in hospitality. We are delighted to continue to support not only in providing job opportunities but as a partner for fundraising, more volunteering or whatever new creative new ideas they come up with next.”